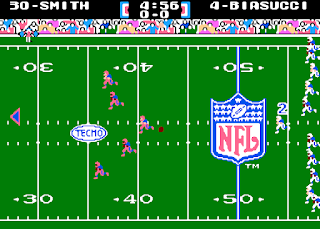 Genre: Sports
Perspective: Side view, Top-down
Sport: Football (American)
Published by: Tecmo
Developed by: Tecmo
Released: 1991
Platform: Nintendo (NES)
It was particularly attractive to fans of the National Football League (NFL) as it was one of the first football games to be licensed for use by all NFL teams as well as for use by all respective NFL players.

In the Tecmo Super Bowl, the player takes control of an NFL team and can play football games either against the computer or a second player. Here you take over either a player of your offense or a player of your defense, depending on the ball possession. In the offense you can choose 4 running or 4 passing play moves and perform them accordingly after the snap. The player has the option of 1) announcing and executing all moves, 2) announcing the moves but letting the computer do it, or 3) leaving everything to the computer that is equivalent to watching. In contrast to a real NFL game, the roster contains only 30 instead of 53 players. There are 11 attackers who tire or injure themselves during the game, so 6 substitute attackers can be substituted, 11 defenders (who neither tire nor ever injure themselves), as well as a kicker and a punter. The fresher the attacker, the more likely it is that they will be able to fend off tackles.
Tecmo displays Super Bowl cutscenes for every touchdown, field goal, interception or injury.

Tecmo Super Bowl is considered one of the most popular football games. The sports broadcaster ESPN voted it the greatest sports video game of all time in 2013, in a vote by PC Magazine it was named the tenth most important computer game ever. Tecmo Super Bowl was played briskly among NFL players. Emmitt Smith, Hines Ward, Tony Gonzalez, Philip Rivers and many other players are known to be big fans of the Tecmo Super Bowl. A peculiarity of the game is that the running backs Bo Jackson and Christian Okoye can hardly be tackled with low exhaustion, which obviously amused Okoye.
Every year there is a Tecmo Super Bowl tournament in Madison. This tournament was documented in an episode of NFL Films.
‹
›
Home
View web version