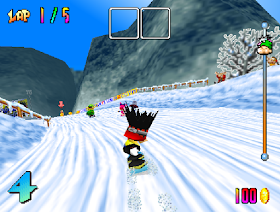 Genre: Racing / driving, Sports
Perspective: Behind view
Interface: Direct control
Sport: Snowboarding / skiing
Published by: Atlus Co.
Developed by: Racdym
Released: 1998
Platform: Nintendo 64 (N64)
Races on snowboards of some big-nosed guys (there are five of them). These buratinas run on their snowboards along various tracks. The game is made pretty well in terms of graphics and sound, but still, probably, it is intended for children of age. However, it won't hurt adults to play either. Game for 1-4 players.
‹
›
Home
View web version