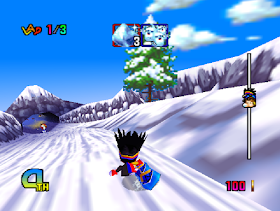 Genre: Racing / driving, Sports
Perspective: Behind view
Interface: Direct control
Sport: Snowboarding / skiing
Published by: Atlus Co.
Developed by: Racdym
Released: 1999
Platform: Nintendo 64 (N64)
Continuation of snowboard racing. The game is made with high quality and interesting. The heroes are now six, and their noses are still super-large. During the races, you can collect various things (including to shoot them at other racers), as well as collect coins. Money can be spent on new boards and paint jobs. In addition to the regular races, there are stunt and super speed descents.
‹
›
Home
View web version