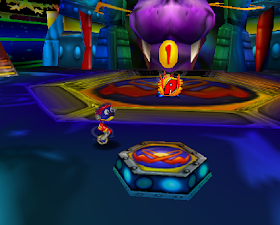 Genre: Action
Perspective: 3rd-person
Pacing: Real-time
Gameplay: Platform
Vehicular: Flight / aviation
Setting: Sci-fi / futuristic
Published by: Ubi Soft Entertainment
Developed by: Sucker Punch Productions LLC
Released: 1999
Platform: Nintendo 64 (N64)
Rocket belongs to Dr Gavin, the architect and owner of Whoopie Mundo, a futuristic theme park. On the night before opening day, he heads to one of the parties, leaving Rocket in charge of the pets: Whoopie the walrus and his Sidekick Jojo the raccoon. As soon as Gavin leaves, Jojo sees Rocket looking for more of his plans to ruin opening day and replace the park with Jojo Mundo. Before he can do anything, Jojo Rocket punches out with a mallet and takes the teleporter down into the park, bringing Whoopie with him. Now you must rescue Rocket Whoopie, find the tickets and tokens Jojo has scattered throughout the park, and catch the raccoon, all before Dr Gavin returns.

The game features six different themed worlds (not including the final level), all connected to the main Whoopie World area. Each world opens to find a necessary amount of tickets in the other worlds. Along the way, the player must learn new moves and maintenance techniques from a robot named Tinker in exchange for tokens throughout the park. Each world has at least one vehicle, used to solve puzzles and obtain tickets. After collecting enough tickets throughout the park, the player can access the final stage, Jojo Mundo, where Jojo will finally face off.

Listed below are the moves throughout the game:
‹
›
Home
View web version