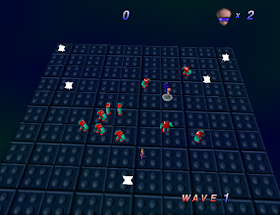 Genre: Action
Perspective: Bird's-eye view
Gameplay: Arcade, Platform, Shooter
Setting: Sci-fi / futuristic
Published by: Crave Entertainment
Developed by: Player 1
Released: 1998
Platform: Nintendo 64 (N64)
This is a remake of the classic arcade game "Robotron 2084". We run a strange little man across a square field, along which, in addition to the main character, a small bunch of people who need to be saved from a very large heap of aliens are running. The game is very intense - during such a crazy action, you absolutely do not pay attention on the graphics, and even unsuccessful music does not bother you, just go a little further than the first levels to fully understand the beauty of the game.
‹
›
Home
View web version