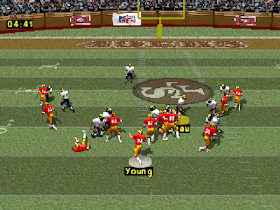 Genre: Sports
Perspective: Bird's-eye view
Sport: Football (American)
Published by: Sony Computer Entertainment of America
Developed by: Sony Interactive Studios America
Released: 1996
Platform: PlayStation (PSX, PS1)
If in the NHL FaceOff game fist fights are just episodes in outwardly decent, measured game action, then in another sports work of SISA the violent scenes are much more desperate and frank. In NFL GameDay, opposing teams literally bump their heads like buffalo during a rut! It is no secret that most people who are watching an American football match with interest have little understanding of what is happening. For those who are not in the know, I tell you that American football is something of a religion for Americans, they just adore it along with another American sports game - baseball. The game is very similar to Rugby, but with modified rules of the game. Nevertheless, whatever one may say, the game is really difficult in content. Each team has 45 players, but only 11 are on the field at any given time. So let's deal with the rules of this rather interesting game.
Each game starts with a coin toss, which decides a lot. When the sides of the field are selected, it is time to kick the ball. It's simple - you need to stop the force indicator and the impact direction indicator at the marks that you select. After catching the ball, you must push it forward along the field as far as possible. Here you will need to do accelerations, dives and use all the buttons for “repelling the threat”. You will certainly be knocked off your feet. Before spreading out on the ground, make sure at least that you have recaptured a decent part of the field. Now you need to choose a way to continue the game. There are many options for this, and this is where your understanding of the game becomes paramount. After choosing one of the ways, try to implement it as best you can - whether you run ahead or pass. If it doesn’t work, go to Coach mode and let the computer pick and play for you, while you watch and learn the lessons. You can watch the game from several angles. You have to choose which one is best to look at in a given situation.
The aim of the attack is to land the ball behind the opponent's line. You can try to run into this zone with the ball, but it is better to throw the ball over the opponent's screens. And it would be nice to complement a successful attack with an accurate shot on goal. For this you will add only one point, but how much fun!
Ultimately, the appeal of NFL GameDay depends on how much you are interested in the sport itself. If you can play other sports games (such as hockey, tennis, football, etc.) just for fun, then here, in order for the game to have any effect, you need to sweat a lot. The most difficult thing is to get comfortable with all the techniques of attack and defense. Some of them are obvious, such as preventing the ball from being kicked off the ground, while the rest is a matter of trial and error. Sure, seasoned American Football fans will have much less trouble, but overall this initial stage is not very pleasant. True, the “user-unfriendly” nature of the game is mitigated by the presence of the Coach mode: here you can get acquainted with the different versions of the game without getting too big for yourself. You just need to start the game and let the computer choose the best options until it ends.

To enter one of the passwords below, select Options from the main menu, then press Select to take you to a memory screen. Press Select again to enter the password (it must be typed in capital letters). After all letters are entered, press Select again. If the password is entered correctly, it will appear on the screen in large yellow letters on a green background. As for passwords marked “unknown effect”, there is little clear. On the one hand, the game accepts them, but it is not possible to detect their effect in the game. Do you know or discover?

Press L2 + R2 to throw the ball onto the sidelines.

Move both players to the same side.

Hold L1 + L2 + R1 + R2 as the game begins loading. Then all winning, losing, and Super Bowl screens may be viewed before the main menu is displayed.

Display the audible menu and exit to see the three plays the computer chooses from.