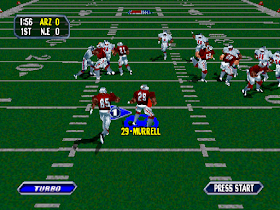 Genre: Sports
Perspective: Bird's-eye view
Visual: 2D scrolling
Sport: Football (American)
Published by: Midway Home Entertainment
Developed by: Midway Games
Released: 1998
Platform: PlayStation (PSX, PS1)
American football fans are once again in luck. In NFL Blitz, the developers tried to satisfy everyone - both the casual player who decided to stick his nose into the "state" sport of the United States, and the longtime fan of American football imitators who spent more than one hour playing the game. There is a mode and playstyle for every type of player in NFL Blitz. In Arcade Mode, the game is simplified as much as possible. Only its basic elements are left, allowing you to master the basic rules and techniques. The Season Play mode puts all the teams in the 1998-99 season at your disposal. and includes Superbowl games. In this sport, it is not enough to know how to "run / shoot down" or "catch / throw", here you need to understand all the intricacies of the game in order to successfully hold meetings with formidable opponents. Game control is extremely simplified and, in practice, decomposes into three buttons: turbo, jump / grip, pass / transfer. NFL Blitz has a ton of different settings and statistics. You can get comprehensive information on the games of your team in the championship and the entire season as a whole, view the characteristics of the players and their performance, adjust the parameters of the team in such a way as to approach the Superbowl games in the best possible way, and much more. NFL Blitz has three settings that allow you to adjust the level of difficulty of the game. These are redefined durations of quarters of the game (in our opinion, halves) from one to eight minutes; game with both enabled and disabled timer, possibility of "false foul". By the way, the last two features make NFL Blitz stand out from Madden '99.
‹
›
Home
View web version