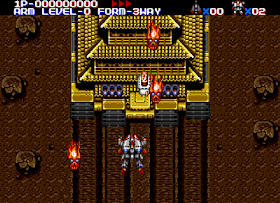 Genre: Action
Perspective: Top-down
Visual: 2D scrolling
Gameplay: Arcade, Shooter
Setting: Fantasy, Sci-fi / futuristic
Published by: Seismic Software Inc.
Developed by: Compile
Released: 1990
Platform: SEGA Genesis / Mega Drive
A title in Compile's shooting series, Aleste, MUSHA puts the player in the role of a pilot of a flying mecha who must destroy a super large computer that threatens planet Earth. The development took less than a year. Originally, the game had a working title of "Aleste 2" and had a similar style to the first game, but it was redirected to present a Japanese aesthetic and a speed metal soundtrack.
The initial reception for MUSHA was mixed. Critics were overwhelmed by the large number of shoot 'em ups on the Mega Drive and felt that the title was unremarkable. Journalists generally agreed that the game had great graphics and pleasant gameplay, but felt it was not original and was not very challenging. The game was relaunched on the Wii Virtual Console in Japan in 2008 and in the West in 2009. In retrospective reviews for its relaunch, MUSHA received much higher praise, being cited for its challenging gameplay, strong soundtrack and graphics considered ahead of its time . It remains among the most highly regarded shoot 'em ups on Mega Drive and is considered one of the best of the 16-bit era. Original MUSHA cartridges have become rare and have high prices in the collector's market.

MUSHA is a vertical scrolling shoot 'em up. The player takes on the role of Terri, a pilot who drives a specially designed mecha vehicle with advanced weaponry called MUSHA. It is sent to fight the Dire 51 supercomputer, built by humans, which began attacking Earth from space in the year 2290. The game conventions are largely held in titles of the Aleste series. The player has a main weapon that can be activated by collecting "Power Chips". There are also three different special weapons that can be collected: piercing lasers, fire-based explosives and rotating shields. They can be upgraded if the same weapon is currently used. If hit while a special weapon is equipped, the player will lose the special weapon, but will remain alive. Being hit without a special weapon will result in the loss of a life. 14–15 For every three Power Chips collected, the player obtains a drone similar to the Gradius series. Only two drones can be equipped at the same time; extras are stored. These drones can be configured in one of six attack modes, such as aiming forward, backward or rotating around the player's ship.

A young Compile team developed MUSHA in less than a year. They originally made a prototype for a new game in the Aleste series called "Aleste 2" for the Sega Genesis, but postponed the project. The team was still feeling pressure to create a game and also wanted to change the direction of the Aleste series. Designer Kazuyuki Nakashima came up with a design that ignored most of the style of Aleste's previous games and instead went with a Japanese aesthetic, including a character with a Noh mask. This change in direction motivated the team to pick up the remains of "Aleste 2" and push it in a new direction.
The valley stage in MUSHA uses the vertical parallax scrolling features of Mega Drive, which was later highlighted by critics as one of the game’s most impressive technical features. The level was programmed by Yuuichi Sotoyama, who also programmed the enemies that enter and leave the depths of the valley, and the tiles that fall on the screen in other phases. Sotoyama worked with sound effects programmer Masanobu Tsukamoto to modulate the frequency of sound effects when objects came in and out of the screen to simulate the Doppler Effect.

For the MUSHA soundtrack, Nakashima originally came up with an idea for what he called "Edo Metal" for composer Toshiaki Sakoda. They finally agreed to create a speed metal soundtrack that would match the game's fast scrolling action. At the time MUSHA was developed, Sakoda felt that most shooting game soundtracks were mostly fusion games and mechanically sound that didn't have a cohesive theme. He wanted this soundtrack to be the first heavy metal soundtrack, or as he called it, a "heady metal suite" or "heavy metal rhapsody".
To compose the song, Sakoda used real instruments, then annotated the song on an MSX computer and converted it to a PC-9800. Since he didn't like mechanical sounds, he programmed virtual instruments to sound as if they were played by humans. Sakoda worked closely with sound effects programmer Masanobu Tsukamoto. Since the game had limited sound channels or tracks, he was careful not to create too many simultaneous sounds so that the sound effects would not cut out the music. Sakoda only had four channels to use for any song, one of which was always on drums. After the soundtrack was almost finished. Compile's leadership told Sakoda to change the song to something that fit the Japanese aesthetic. After listening to a new soundtrack with Japanese instruments, the leadership told Sakoda to return to its original music.

MUSHA was first released in Japan on December 21, 1990. It was released in North America the following year.
‹
›
Home
View web version