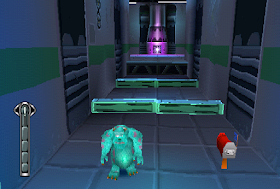 Genre: Action
Perspective: 3rd-person
Published by: Sony Computer Entertainment America Inc.
Developed by: Artificial Mind & Movement
Released: 2001
Platform: PlayStation (PSX, PS1)
The game's plot is very simple. After all, everyone has long known that when children go to bed, monsters crawl out of the wardrobe, crawl out from under the bed, and perhaps the only thing we do not know is that these monsters were trained at Monsters INC and became "Тор Scarer". In the course of the game, you have to use the famous heroes of the Disney movie as playable characters. In particular, Sulley, a hefty gorilla-like monster with blue fur, or Mike, a green one-eyed frog-like bubble. In this case, you need to go through more than 15 levels and study all the Scares of your character, the so-called Fright Abilities, and there are about 40 of them. And if you consider that the graphics are in no way inferior in quality to a cartoon, musical accompaniment too, then the younger generation of gamers will certainly be pretty. The game was released simultaneously for PlayStation and PlayStation 2.
‹
›
Home
View web version