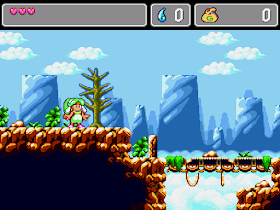 Genre: Action
Perspective: Side view
Visual: 2D scrolling
Art: Anime / manga
Gameplay: Metroidvania, Platform, RPG elements
Setting: Fantasy
Published by: SEGA Enterprises Ltd.
Developed by: Westone Co.
Released: 1994
Platform: SEGA Genesis / Mega Drive
The story revolves around a young woman named Asha, who, after hearing ghosts whispering in the wind, goes on an adventure. These ghosts ask for help and Asha decides to help them. During her journey, she becomes a ghost owner and adopts a tiny monster named Pepelogoo, who can help her get to inaccessible places.

A - (not available immediately) - call the kitten to you, or let it go in one direction or another;
B - blow with a sword;
C - jump (Down + C - jump from platforms);
Down - put a shield;
Left or Right - (2 times) running;
Up - talk to someone, enter the door, open the chest;
The kitten (later transforming into a huge cat) is a multifunctional assistant. He can:
Also with its help you can make double jumps and long gliding flights.
The recording of the game is a conversation with an elder and the answer "yes" (the top line of the hieroglyphs). Then in one of the two files you write down your situation, which will hold. You cannot erase it.

By clicking "Start" you can see what items you have in stock. You can also use the desired item (selection by cursor and C).
‹
›
Home
View web version