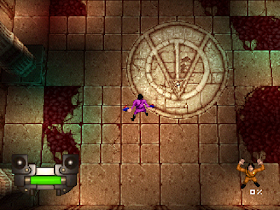 Genre: Action, Strategy / tactics
Perspective: 3rd-person
Gameplay: Shooter
Setting: Sci-fi / futuristic
Published by: MGM Interactive
Developed by: Eurocom Developments Ltd
Released: 1997
Platform: PlayStation (PSX, PS1)
This game is somewhat of a surprise from publisher MGM Interactive and development company Eurocom. An old-fashioned "retro shooter" game. The younger generation of players have not seen games of this type. They admire complex 3D bestsellers with excellent animation and graphics, free movement in space of beautifully rendered characters, difficult riddles and puzzles, and a complex control system. Well, what then? Press the trigger (button) and try to avoid enemies. But the players of the older generation, who grew up on the good old Spectrum and Commodore 64, have kept in their hearts nostalgic memories and love for these simple and uncomplicated games! Why should they be surprised with joy if they found out that their favorite genre is returning, and even in three-dimensional graphics, with excellent sound and many other modern "bells and whistles".
The plot of the game is, of course, unpretentious. In a fantasy world, on a remote Martian colony, bioorganic intelligence develops at a tremendous speed, and soon robotic androids take over. And, of course, they start doing all sorts of dirty tricks. Well, and you are a soldier who must stop this nightmare until the "test tube guys" take over the whole world. What a banality, but how brilliantly done! Light effects, explosions, jets of fire! As many as 30 completely different, beautifully designed levels that become more difficult as you progress.
Now the player has the opportunity to improve weapons, as well as "improve" strength and health, for which there are many different (sometimes original) power-ups at the levels. A variety of weapons (as many as 40 types!) And a two-player mode make the game attractive not only for nostalgic oldies. Moreover, players can play both in cooperation mode and in competition mode.
Visulano the game looks like transitions up and down through numerous levels, as if borrowed from the popular and bloody game Loaded. Levels are broken into stages, numerous stairs, gates, doors, walls, switches, allowing you to penetrate into the depths of the levels. Machine Hunter uses D-Pad Shooting with 4 keys for shooting, as in games like Robotron X or Apocalypse.

The game offers a dark atmosphere. The environments are marked by science fiction, (we go from temple ruins to space hangars). In addition to common enemies, combat robots are quite neat and sought after. Small details of the game are to be noted, such as the digitized voices, the fact that walking in the blood leaves traces, or the presence of rats and other small worms (depending on the level) that we can exterminate at will. .

Enter the following codes on the password screen (An explosion sound will confirm the correct code):

As you play, enter this code to activate the Cheat Menu. Enter the main menu screen and select the Enter Password option. Then enter
the password is "??? HOST ???" and then click Start. Return to the main menu screen and see a new option - Cheats. Now you have access to a whole bunch of awesome options. This includes "Invincibility", "Unlimited Continues" and "One-Hit Kills".