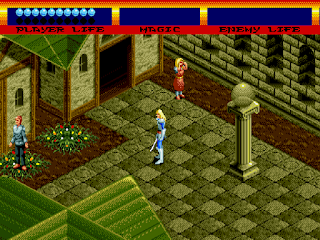 Genre: Action
Perspective: Bird's-eye view
Visual: Isometric
Gameplay: Puzzle elements
Setting: Fantasy
Published by: SEGA of America
Developed by: Treasure Co.
Released: 1995
Platform: SEGA Genesis / Mega Drive
The adventure begins with the arrival of the knight Sir David in the city of Green Row. Recently Green Row suffered from a series of kidnappings by local residents, and the King called Sir David to investigate the incident. The player can perform simple blows with a sword, use spells of four schools (wind, fire, earth, water), move freely, jump and push objects. The game involves solving many puzzles, but for the most part it is a platformer with some elements from RPGs, such as trade, equipment and spell casting. The whole gameplay is the player's progress from the first floor of the dungeon to the sixth floor, on which the main enemy is located. Some floors are non-linear. For example, the third floor has several secret rooms with bonus items, the fifth floor is a collection of eight mini-worlds.