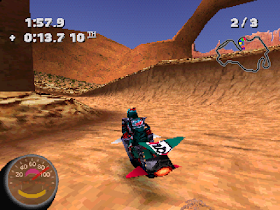 Genre: Action, Racing / driving
Perspective: 1st-person, Behind view
Gameplay: Arcade
Interface: Direct control
Vehicular: Naval / watercraft
Setting: Sci-fi / futuristic
Published by: Sony Computer Entertainment America Inc.
Developed by: 989 Studios, SingleTrac Entertainment Technologies
Released: 1998
Platform: PlayStation (PSX, PS1)
The sequel to the popular flying bike racing from the creators of the Twisted Metal series. From a technical point of view, the changes, in comparison with the first part, are almost imperceptible, nevertheless, the developers have introduced a certain "marafet". In addition, the already not without that fast game became even faster, but the controls became more adequate, although some of the problems still persist. Now you have 15 extreme tracks (including secret ones) at your disposal, plus their mirroring. You will race at breakneck speed through canyons, forests, caves, waterfalls, snow and even lava. Controlling a hurricane bike requires a lot of skill, but if you like the game, then after a while you will feel quite confident and challenge your friend in split screen mode.

Various hidden secret options store various trophies for the playable characters. Pick the trick you want and then apply it. You just need to play for the appropriate character.

This trick is very intricate and difficult, but it comes at a price as it opens up access to all the tracks. From the title screen, head to the options screen. Set the difficulty level to Master and the number of laps in the race (Laps Per Race) - 5 laps. Then exit and enter single player mode. Select Li'l Dave from the rider selection screen (press X). Now press T before returning to the title screen. Press Up, Down, Left, Right, R2, R1, L2, L1 (very fast! - within 4 seconds). Go back to the options menu and set the number of laps to 3. Go back to single player mode and select Wild Ride (press X). Click Triangle (before you return) in the title screen. Now press Up, Left, Down, Right, Square, R2, Circle, L2 (very fast). Go back to the options menu and set the difficulty level to Amateur and disable Turbo. Go to single player mode and select Bomber. Go back to the title screen and press R2, R1, L1, L2, R2, R1, L1, L2 (very fast only).
Now select "Racer" and "Single Track" from the Choose Race Type Screen. You will see a miracle: now absolutely all tracks are available to you, even including the mirror "flip-flops"!

To chase the mysterious Enigma, go to the options menu and set the difficulty level to Master and the number of circles to 6. Return to the title screen, press Letf, Square, Down, Triangle, Right, Circle, L1, R1 (very fast). You can now play as Enigma found on Select Rider Screen.
‹
›
Home
View web version