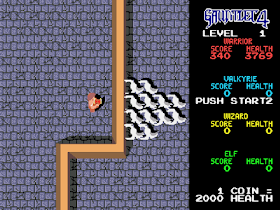 Genre: Action
Perspective: Top-down
Gameplay: Arcade
Setting: Fantasy
Published by: Tengen Inc.
Developed by: Atari Games Corporation
Released: 1993
Platform: SEGA Genesis / Mega Drive
There are many mysterious and legendary in this enchanted world. When the mystery of the tower became known, fairy legends came to replace, retold over and over again by many people. Those who aspired to adventure, despite the risk, for themselves, created this magical world of fairy tales and implausible legends, which they listen to with pleasure in our time. People called these fairytale and legend writers adventurers. However, even in our time, there is still one single secret that no one could solve. The ancient sages called it "The secret defense of the ancient castle towers." The ancient castle, hidden by unknown magical forces deep inside the mountains, sows terror among all people living near these mysterious mountains. However, this does not prevent the locals from having fun with the adventurers who say that this very castle is surrounded by four towers. Legends say that the towers protect the castle itself from
the invasion of someone or something from the outside world. Despite this. ancient books read as follows: “If you cannot break the magic of the four towers, you will not enter the castle itself; for a powerful enchantment guards the crystal keys, so necessary for the passage into the castle. Some say that the ancient secret of the treasury lies within the walls of the castle. Many tried to reveal the secret of the castle, but, having gone for the next adventures and treasures, they never returned. This secret is still alive.
Despite the gloomy prediction and rumors of a magical castle, there are four hero travelers. The warrior THOR, the Valkyrie THYRA, the magician MERLIN and the elf QUESTOR have nothing in common, except the goal to destroy the spell of the castle and bring peace to this mythical land. The leader of this four is a warrior. He comes from the barbarians. This character moves very slowly, but the power of his attack compensates for this disadvantage. Valkyrie is the leader of the female warriors. Average character: moves fast enough, as well as wields a sword. A magician is a magician, but. although he owns magic, this does not make him immortal. The elf is a friend from the forest who wields a crossbow. The fastest character in the game. Shoots very quickly, but weakly. Perhaps, if you like shooting from a bow, then shoot an elf better, but remember:
he's weak enough. Welcome to the fairy world of GAUNTLET - the world of dragons, magic and
monsters ...

The game controls are simple.
Button A: is used to apply rings, items, replenish energy (maximum), change character parameters.
Button B: using your own weapon, specific to each character; cancellation of the use of an object or ring.
Button C: use magic.
Start: call the character menu.

Use of objects by the character

In the game you may come across the following items: keys (KEY), magic drinks (MAGIC POTION), treasures (TREASURE), items that allow you to disappear from enemies, that is, enemies will not notice you (invisibiliti); various magic rings (rings), as well as food, allowing you to fill up the missing energy (food). You can also purchase the necessary items from the gnome sellers at the beginning of the game (you can also meet them in the process of passing the towers).
To apply the item you need, you need to do the following: press Start to display the character menu (in this menu, by pressing the left and right buttons, you can apply items; view the status of your character at the moment of the game; write down the game code; replenish energy-maximum, increasing it; change the characteristics of the character and his weapons).
Use the cursor (left or right) to select the item you need.
If you want to apply a ring, then in the corresponding menu, press the A button and move the blinking cursor over the ring you need. Then press Start and the ring will take effect. If you want to use an item (Healdrink or Warp wing}, then press the A button, move the blinking cursor over the item you need, press Start and again the A button. Then the item will be applied. To use the magic drink (MAGIC POTION), press the C button and the magic will be applied It destroys almost all life on this floor.
Keys, food, invisibility items are applied independently of you. Keys allow you to open closed doors. You can have limited quantities of keys and magic drinks.

In the game for killed enemies, you get a certain amount of points that you can use to increase the maximuma of your energy. When you press Start during the game, you will see the following menu: STATUS 1 - here you can see the power of your magic, your defense, the power of your melee power, as well as the points for the enemies you killed (EP) and the maximum HP energy The last numbers in brackets on each line indicate the number of points for killed enemies required to replenish your energy (HP) and the power of your character In STATUS 2 you can view the power of your weapon, its speed, how much this weapon can protect you in battle. the speed of your character. EQUIPMENT: shows what weapon you currently have. ITEM: All magic rings and items will be located here. PASSWORD here you can view and write down the code of the current game in a specific tower and the code of your parameters.
To replenish the maximum energy, you need to press in the corresponding menu (STATUS 1 OR STATUS 2) button A on the line of your HP energy. Then you will have more energy to complete the game.

In the game, in a number of cases, in order to pass a particular section, you must change the corresponding parameter of your character. In some cases, changing this particular character parameter will allow you to complete the game. Since the power of the player-character increases, you will not always be able to control the actions of this character. Therefore, the game provides for changing the parameters of the game character and his weapon (there are six of them). To change this or that parameter, select the STATUS 1 or STATUS 2 menu and press the button A. Place the blinking cursor over the character's parameter and change it by pressing left or right. Press Start to change the parameters or if you do not want to change it, press B.
‹
›
Home
View web version