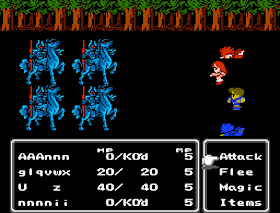 Genre: Role-Playing (RPG)
Perspective: Top-down
Pacing: Turn-based
Gameplay: Japanese-style RPG (JRPG)
Setting: Fantasy
Published by: Square Co.
Developed by: Square Co.
Released: 1988
Platform: Nintendo (NES)
Continuation of the famous Japanese role-playing game. This time, more emphasis was placed on the plot, which tells about confronting the irrepressible ambitions of the evil Empire. Now this is not a set of separate tasks, but albeit a simple, but complete dramatic story. The main group will periodically be joined by the so-called "guest", plot, characters. From now on, the heroes separately pump each of their abilities in battles. Even an archer can be made a severe war, and with a certain skill, each of the characters can become a kind of universal, capable of both magic and physical attacks. The graphics have grown slightly in comparison with the first part.
‹
›
Home
View web version