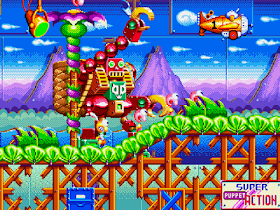 Genre: Action
Perspective: Side view
Visual: 2D scrolling
Gameplay: Arcade, Platform, Shooter
Published by: SEGA of America
Developed by: Treasure Co.
Released: 1994
Platforms: SEGA Genesis / Mega Drive, SEGA Master System (MS)
The protagonist of the game - named Headdy with the help of his original abilities is trying to save the puppet city from the invasion of the army of the main villain of the game - the Dark Demon.
Headdy's original abilities lie in the ability to attack enemies with the help of his head, which is not fixed on the body, but freely hovering above it, like another computer character - Rayman. The hero's head can be changed in certain places of the game, there are 19 options in total - from a hammer head and a spiked head to a vacuum cleaner head and a head, making Heddy invisible and invulnerable. In addition to attacks, you can cling to special objects with your head and, pulling up on them, get onto higher platforms.
Otherwise, Dynamite Headdy is a typical platformer. Heddy walks through colorful platform levels, collects bonus objects, fights enemies and, from time to time, bosses - especially strong opponents. At the end of the game, the hero will have a battle with the main antagonist - the Dark Demon.
In total, the game consists of 9 levels and the final battle, and most of the levels are split into 3-4 more sublevels.
‹
›
Home
View web version