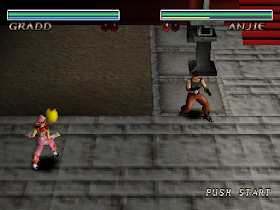 Genre: Action
Perspective: 3rd-person
Gameplay: Fighting
Interface: Direct control
Published by: KOEI Corporation
Developed by: Omega Force
Released: 1998
Platform: PlayStation (PSX, PS1)
1000 years ago the people of Strega came to the small country of Samuel. They possessed a mysterious power and knowledge that they shared with the people of Samuel, which led to the prosperity of the once poor country. They bestowed upon them mystical artifacts known as Jeno, endowing the possessed with incredible powers and powers. But as is usually the case, power breeds greed and arrogance, the people of Samuel rejected their benefactors and invaded neighboring lands bringing death and destruction with them. So a millennium passed ... And then one day this artifact was found in the land of Ipsen, having learned about this, the people of Samuel asked the Emperor to destroy them, but the Emperor refused and declared war on Samuel.
Destrega is one of the more original fighting games. Its originality lies in the fact that all the fights are connected by a fascinating storyline. When an evil ruler kills your family and burns down a settlement, then you simply have to take revenge.
One-on-one battles using the characters' magical abilities. Flashes of light! The sound of blows! Fascinating battle! Each character in the game has 3 types of magic: fast magic, energy and long-lasting magic. And the end of vengeance will be the DeStrega artifact! Stunning special effects, excellent soundtrack, decent graphics. The duels are not limited to a small arena, but vast spaces where parts of the landscape can be used for cover and treacherous ambushes. The game is very good in two-player mode, because the computer opponent does not differ in a variety of actions, while your real rival can set you the heat to the fullest. Attacks can be carried out both on the ground and in the air, the characters are distinguished by good animation.