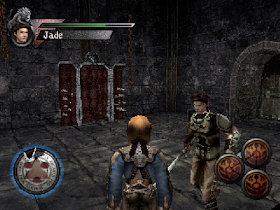 Genre: Role-Playing (RPG), Strategy / tactics
Perspective: 3rd-person
Pacing: Real-time
Gameplay: Real-time strategy
Setting: Fantasy
Narrative: Horror
Published by: Tecmo
Developed by: Tecmo
Released: 2000
Platform: PlayStation (PSX, PS1)
This is the third and final part for the SONY PlayStation platform, the next part was published for the second PlayStation. As before, the game does not have any intelligible plot, or rather it exists (about it below), but by and large it is not needed, because the main goal of the game is to mock your poor enemies, and noble goals serve as a weak excuse for everyone the fanaticism that the main character does on the screen. In fact, this is a real game for sadists, no matter how it is veiled and what goals the main character pursues. For those who are just getting acquainted with the series, I inform you that you have at your disposal many different traps, the combination of which can reach 2000 options, whether it be pits with sharp spikes, arrows flying out of the walls, or a huge boulder falling on the head of an unfortunate enemy from nowhere ... , it would be a fantasy, but there is a method. The game is not linear, that is, you can get several endings of the game. The graphics of the game look significantly better compared to previous games (improved engine Kagero: Deception II), the menu is a little confusing, but very functional as soon as you understand what's what. In general, despite its devilish essence, Deception III: Dark Delusion is an original and beautiful game worthy of adding to your collection.

The plot of the game is as follows. The action of this game takes place in the Middle Ages on an unknown island, where the main character Layna and her family are brought as prisoners. After the execution of her mother and brother, the girl wakes up in a cold dungeon, where, with the help of an unfamiliar boy, she discovers magic power in herself. Without hesitation, killing the guard, the newly converted witch escapes from prison, meets a young man with similar abilities and learns about a mythical stone that can turn back time. Hoping to resurrect her family, she goes in search of a mystical artifact.