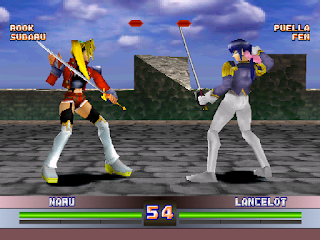 Genre: Action
Perspective: Side view
Visual: 2D scrolling
Art: Anime / manga
Gameplay: Fighting
Interface: Direct control
Setting: Fantasy
Narrative: Martial arts
Published by: Takara, Studio 3
Developed by: Tamsoft
Released: 1999
Platform: PlayStation (PSX, PS1)
Ten years after the events of Battle Arena Toshinden 3, Eiji Shinjo, the new leader of the Gerard Foundation, organized the fourth Toshinden tournament to reclaim four sacred symbols, namely a weapon that can be used either for peace or destruction. Eiji's old friend Vermilion took possession of these symbols for the sake of his ambitions (or rather, the weapon took possession of him) and now Eiji, along with the fighters of the tournament, including his nephew Subaru, have to stop the villain. A feature of the game is the ability to use everything that comes to hand in battle, be it swords, spears, scythes, whips and knives, as well as super-strikes that look very impressive. Each of the characters in the game has its own video stories and endings. In addition to the typical fighting game modes, Toshinden 4 has many mini-games, including casual ones like Arkanoid, Tetris, and the like.

All dates in Database mode