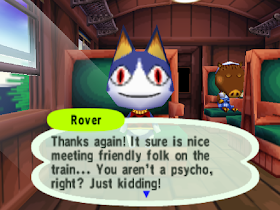 Genre: Simulation
Perspective: Bird's-eye view
Pacing: Persistent
Gameplay: Life / social simulation
Published by: Nintendo Co.
Developed by: Nintendo EAD
Released: 2001
Platform: Nintendo 64 (N64)
Animal Crossing is an endless game in which a human resident comes to a village inhabited by anthropomorphic animals. The player can interact with them, as well as with other players, through the GameCube memory card. The game syncs with the GameCube's internal clock and calendar, allowing you to play it in real time, which also affects seasons and holidays.

Animal Crossing is a life simulator described by Nintendo as a "communication game". The game is non-linear, and the player-villager can live a separate life with a small set of activities or mandatory tasks. Players take on the role of a human resident. The gender and appearance of the character depend on the answers given to the cat named Rover, which the player meets on the train that takes the inhabitant to the city. There are goals and objectives that the player can achieve. The game operates in real time, simulating the passage of time using the GameCube's internal clock. Throughout the game, the city hosts various real-life holidays such as Independence Day, Halloween, Harvest Festival (Thanksgiving) and Toy Day (Christmas). Other activities such as fishing tournaments and morning fitness classes take place on a regular schedule. When players stop playing, they can talk to their Gyroid, an anthropomorphic creature near their home, to save the game. If the player turns off the game or urgently restarts the console without first saving, a mole named Mr. Resetti appears in front of the player's house the next time the game starts. He obstructs the player as punishment for ending the game without saving; the gameplay achieved after the previous playthrough is lost.
One of the main goals of the player in the early stages of the game is to increase the size of his house. This house is a repository of furniture and other items acquired during the game. The house can be customized by changing the color of the roof, installing furniture, music, wallpaper and floor. These characteristics are assessed by the Happy Room Academy (HRA).
Tom Nook is a tanuki (raccoon in North American and European versions) who runs a local store. At the start of the game, he gives the player his first house with a mortgage of RSD 19,800 (in-game currency). After paying off the debt, part of which is done through a joint work with Tom Nook, he offers the player a new increase in the house with the subsequent payment of the mortgage in a larger amount. During the game, the house expands several times. Players can sell surplus goods to Tom Nuk in exchange for dinis.
There are initially six villagers in the village, with more villagers moving in and out depending on the player's actions. A maximum of fifteen residents can live at the same time. All villagers are animals and each has a home for the player to visit. There are many interactions between the player and the villagers, including talking, trading items, completing quests, and writing letters. In the e + version, the purchase of medicines in case of illness is added to the activities. Villagers interact with each other regardless of the player's actions.
‹
›
Home
View web version