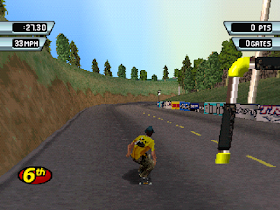 Genre: Racing / driving, Sports
Perspective: Behind view
Gameplay: Tricks / stunts
Sport: Skateboarding
Vehicular: Bike / Bicycling
Published by: 989 Studios
Developed by: 989 Studios
Released: 1999
Platform: PlayStation (PSX, PS1)
At one time, it was very popular to make extreme sports simulators on the PSX. A lot of games are still thriving today. An example is Tony Hawk's Pro skater series. Some extreme games no longer thrive, but they are remembered, some are completely forgotten. But most importantly, there were no bad simulators among them. They were quite similar to each other: the main goal was to earn more points or come first (and what else to come up with?). Among extreme PSX simulators, I can mention the THPS, BMX series and, of course, 3Xtreme, which will now be discussed.
Of course, 3Xtreme did not differ from similar games in originality and, moreover, in graphics or sounds. Even more so: 3Xtreme is not one of a kind. Cool boarders 4 is a very similar simulator. Having played both games, you can immediately find similarities. You also need to come first, you also need to do tricks, but in something 3Xtreme is better, although, on the other hand, in something worse. The best thing about 3Xtreme is that the whole game doesn't focus on snowboards alone; you can control three types of transport in the game: roller skates, a board and a bicycle. The 3Xtreme also has a wide variety of trails, unlike the CB4 snow. But, in 3Xtreme, you cannot create a character, and in general, 3Xtreme characters are tied only to any kind of transport (skate, roller skates, bike). This topic can be argued for a very long time, but now I would like to talk about the gameplay of 3Xtreme.
The game actually has original gameplay. In fact, a race, but not an ordinary race on cars (although if you enter the code, then you can ride them in this game), this race is extreme. As I said, you will be able to ride three extreme modes of transport. After choosing a character and equipment for him, you immediately go to the race. Oddly enough, rollers, a bike and a board in the game are equivalent. That is, skaters and roller skaters and cyclists participate in the race at the same time. Of course, this is not very plausible, is it possible to overtake a bicycle on a skateboard? But in this game it happens so often. In addition to the fact that you have to come first in the game, you also have to do all sorts of feints on the trampolines and uneven bars. But that's not all, there are gates along the track in different places, through which you have to pass, however, they are not available in all modes. For example, in the "on time" mode, the main thing is to complete a certain number of circles in as little time as possible. Sometimes I even wonder how these extreme sportsmen can ride a skateboard, overtake rivals, make all sorts of feints and drive through the gate right away. Straight virtuosos of extreme! In addition, you can also fight with your fists in the game. This is a very useful thing, besides, enemies hardly use it. In general, I would prefer this tactic of passing 3Xtreme: first you choose someone with a bike, then, driving along the highway, you sharply cut turns, and if someone is overtaking, you add speed and beat him. Although the gameplay is original, it gets boring. The levels differ only in difficulty. Would make some "boss" with whom you need to drive "one-on-one" on the highway and beat him.
The graphics in the game are not very bright. As in all simulators, they try to make people as good as possible, but it doesn't work out very well, and this is noticeable not only in the emulator. Even on PSX, I noticed that something was wrong, and in the emulator I already realized what was wrong - these models are too strange. When I chose one African American, from behind he seemed like an orangutan or some kind of dwarf. The tracks are very poorly detailed, and in the emulator, polygons often drop out and some part of the background is visible, which should not be visible (probably, I configured the emulator a little incorrectly or it does not support this game well). No, I'm not scolding, I'm just saying that there are games of a similar type, but much better in terms of graphics.
Sounds and music in the game somehow did not please me much, I simply did not notice them. But this is probably good. Melodies should be such that there is no particular anger at them and that they do not interfere with the gameplay. And this is the main point. Of course, there are games with masterpiece melodies, but this is rare. Sounds - they are not bad either, they are very suitable for music, which, as I said above, I did not really notice. In this game, I like to beat opponents, so the sound of hitting an opponent especially engraved in my memory.

Highlight "Memory Card" on the main menu, press LEFT or RIGHT to display the "code's option" and press X.

Enter GRINDS on the cheats screen to gain access to all characters.

Enter DOMINIQUE on the codes screen to play as Dominic, Top Athlete, 95% across all attributes.

Enter LUGNUT on the cheats screen to play as Lug Nut. He is a true Frankenstein clone, 95% in all attributes.

Enter GEEP on the cheats screen to play as Geep, an alien biker.

Play as Red the Car

Enter REDLINE on the codes screen.

Play as White the Car

Enter WHITELINE on the code screen.

Enter NYUB on the cheats screen to play as Nyub, the foreign rollerblading player.

Enter BINK on the codes screen.

Play as Red the Car

Enter REDLINE on the codes screen.

Play as White the Car

Enter WHITELINE on the code screen.

Play as Blue the Car

Enter BLUELINE on the code screen.