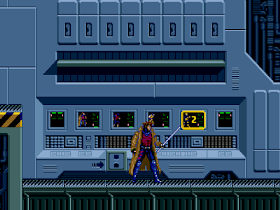 Genre: Action
Perspective: Side view
Visual: 2D scrolling
Setting: Sci-fi / futuristic
Published by: SEGA of America
Developed by: Western Technologies Inc.
Released: 1993
Platform: SEGA Genesis / Mega Drive
The growing hysteria about the more and more emergence of mutants, people with superpowers, led Professor Professor X, a telepath, to create X-Men to prove that mutants are not going to take over the world ... However, not all mutants think so. One of the strongest mutants, Magneto decided to enslave the world and only X-Men can stop him! The game is based on the cartoon series.
The sound, of course, is not good enough (effects tied to various events and actions evoke associations with anything other than what is happening on the screen). The graphics are also not perfect, but remember what dates we are talking about. The characters and the surrounding world are drawn quite clearly, and the detail is pretty decent for this period of time and for this console. Strong middling: asteroids, spaceships, crazy computers and famous heroes, everything is there. The staff of heroes, however, is not so large in comparison with other games in this universe, but the game obligingly gives a dossier on all the characters, observes the manner of speech of each in monologues and honestly takes them out of the game one by one after an unsuccessful attempt to pass. So you will most likely have time to play for everyone.
The game is popular precisely due to its high-profile name, since neither the graphics, the music nor the plot stand out in any special way.
‹
›
Home
View web version