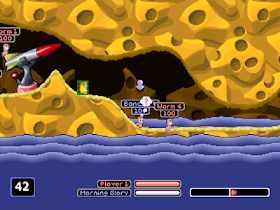 Genre: Strategy / tactics
Perspective: Side view
Visual: 2D scrolling
Pacing: Turn-based
Gameplay: Artillery
Interface: Direct control, Multiple units / characters control
Narrative: Comedy, War
Published by: Ubi Soft Entertainment Software
Developed by: Team17 Software Limited
Released: 2001
Platform: PlayStation (PSX, PS1)
There is practically no player on earth who has not heard of Team17's Worms series. Worms World Party for PSX is the seventh title in the Worms series. The game was released in 2001 and was the last 2D game in the series before the release of Worms 3D.
The game is actually an expanded version of Worms Armageddon with a new set of missions and features.
We are all familiar with the gameplay of turn-based games, we play as a team of worms, and we have to kill our own kind in the most sophisticated way. Until all the worms in the enemy team are destroyed. For this we have a large arsenal of weapons and other auxiliary gadgets.
The process of the game may be somewhat reminiscent of chess, because if we play, the game against each other may resemble chess. It seems that everything is in sight, but what is on the mind of the opponent we do not know.
The most unique thing in the entire series of worms is that we can wipe the entire landscape of the location from the face of the earth, destroying it. There are also many different most interesting features in the game that you will have to learn by playing this wonderful game. There is nothing better than cooperative games.
‹
›
Home
View web version