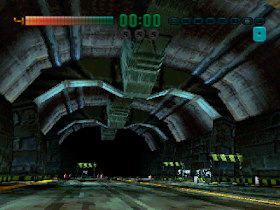 Genre: Action
Perspective: 1st-person
Gameplay: Shooter
Setting: Sci-fi / futuristic
Published by: Acclaim Entertainment
Developed by: NEON Software GmbH
Released: 1996
Platform: PlayStation (PSX, PS1)
It is a action game with impressive visuals. The plot of the game revolves around your attempts to stop the megalomaniac, who really wants to detonate the bomb he invented. To save the world, you will have to crawl a lot through the sewer tunnels, which basically make up the world of Tunnel B1. Along the way, you will encounter robots and enemy guard posts, as well as plutonium warehouses. All this must be destroyed. As in any game, consisting of several missions, to get to the next level, you need to complete a certain task. The game starts off relatively straightforward, so you will have time to get comfortable with controlling the ship, firing, collecting devices that enhance your firepower and the tactics of destroying androids that come across at every step. When you reach the last missions, the time to complete the assigned task will be limited, and the number of enemies will begin to multiply, and their types will increase significantly.
And now about the schedule. Great attention paid to graphics has created an extremely realistic environment in the game. The lighting is remarkably implemented: light sources, haze, lamp transparency and color distribution schemes that change in different places.
In Tunnel B1, your ship has a non-standard set of flight qualities. He is well controlled (responsive to your every command), and his movement is quite predictable (fleeting interference does not affect him). The inertia is very believable and the motion model is accurate and realistic. The accuracy with which you can move your ship through space is amazing. To get into a comfortable position, you can make movements to the left - right, forward - backward, and even turn the aircraft in place. The available arsenal (lasers and mines, guns and missiles, etc.) is impressive in variety, and the possibilities for destruction of the environment are almost endless. You can use two types of weapons at the same time, and there may be even more on board the ship. Excellent graphics ensure the success of the fighting. In Tunnel B1, enemies appear on the horizon, you will not have any sudden jumps from a distance of two meters. So the fight is always on an equal footing.