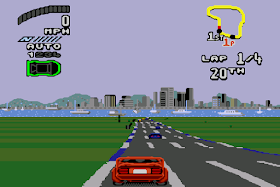 Genre: Racing / driving
Perspective: Behind view
Gameplay: Arcade
Interface: Direct control
Vehicular: Automobile, Street racing
Published by: Vic Tokai
Developed by: Gremlin Graphics Software Limited
Released: 1994
Platforms: SEGA Genesis / Mega Drive, Super Nintendo (SNES)
The game is a sequel to the Top Gear game that never published on SEGA Genesis. The gameplay in comparison with the first part has improved significantly. There are many new features and nuances. Now the game has weather and depending on the weather conditions you need to choose the right tires for your car. It also became possible to improve your car. To do this, you need to collect and earn money. In the game, you can use nitro (acceleration). Various bonuses in the form of money and acceleration have also appeared on the track. The game features 16 countries and 64 cities from these countries. Quite a large selection of game modes, including for two players. You can choose the type of gearbox.
‹
›
Home
View web version