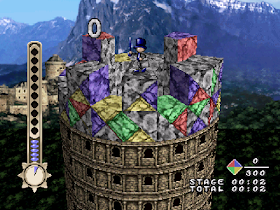 Genre: Action, Puzzle
Perspective: Side view
Gameplay: Tile matching puzzle
Published by: A1 Games
Developed by: Techno Soleil Corporation
Released: 2003
Platform: PlayStation (PSX, PS1)
According to an ancient legend, once people were so proud that they decided to catch up with the heavens, for which they began to build a tall tower, in the hope of reaching the sky, but the god sitting in heaven did not like it very much and he destroyed the tower and cursed all the people who built it, giving them incomprehensible for each other and for themselves by speech, so that they could not again build a good thread like this, according to legend, and migrant workers from Tajikistan were born. As a person who does not believe in unfounded fairy tales, you must definitely check on your own experience the veracity of this legend and, in spite of God's terrible prohibition, single-handedly erect a tower right up to heaven, and maybe even higher. This game will just present you with such an opportunity, and if you are full of determination and courage, then your path lies current forward, that is, up, straight to the heavenly groves.
‹
›
Home
View web version