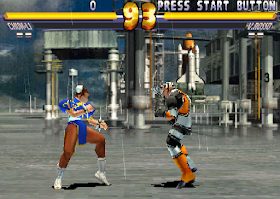 As in the original, this combination can hardly be blocked by your opponent and is capable of knocking him down. This consumes one level on the Super Combo Gauge indicator, and you can perform this combination by pressing the punch and kick buttons simultaneously with the same force, for example, HP + NC.

This is a new combination. It was not in previous versions. To complete it, you need one level on the Super Combo Gauge indicator, and as a result, your character will literally turn into an insane fighter who strikes much faster and more powerful. In this case, you will perform multi-hit combinations with much more ease. This mode works only for a few seconds, but gives you the opportunity to deal with your opponent. To activate it, press the Punch and Kick buttons of different strength, i.e. MP + NK. When running Excel, super combos and Guard Breaks cannot be executed.

These powerful attacks deal serious damage to the enemy and are often decisive. Each character has an arsenal of such super combinations, each of which requires at least one level on the Combo Gauge indicator, but do not regret it, as you will cause very serious damage to your opponent.

Perhaps the most powerful and almost deadly attack. Each character has at least one of these attacks, and the effect is simply overwhelming. True, they are quite difficult to complete, but if your Combo Gauge indicator is filled to capacity, then you can perform this crushing attack and achieve an unconditional victory.

There are three types of Cancels in the game, i.e. "transformation systems". The Standard Type Cancel turns a normal Punch or Kick move into a Special Move move. However, not all moves can be turned into Special Move and vice versa.

When you execute Super Combo, a completely different combination can be executed if the super cancel system is activated. Up to three different super combo combinations can be performed in a row in this way, and the enemy will take monstrous damage.

When a super combo is executed and the character is on the ground, as a result of activating the Cancel Break system, the attack can be turned into a Guard Break attack.
‹
›
Home
View web version