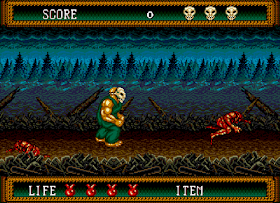 Genre: Action
Perspective: Side view
Visual: 2D scrolling
Gameplay: Beat 'em up
Narrative: Horror
Published by: Namco Hometek Inc.
Developed by: Now Production Co.
Released: 1992
Platform: SEGA Genesis / Mega Drive
It hasn't been a long time since you escaped from this damn place, you have regained consciousness a little from all this. But even now you have terrible nightmares at night - dreams about your beloved Jennifer, who could not escape from there. "we can still save her," came a voice from nowhere.
You will have to face your fear. In your hands is a mask with supernatural powers. Only she can give you a chance to return from this terrible place alive and save Jennifer from the clutches of demons while she is still alive ...
This game has breathed new life into the platform fights genre. Amazing graphics, sound and amazing gameplay. What you need for a real player.
The first game in the series, Splatterhouse, was released exclusively on the Turbo Grafix 16 platform.
Splatterhouse 2 (1992, your first "excursion" to hell, the game is a normal action game, you go, kill everyone. You can also pick up various things to more effectively destroy enemies.)
‹
›
Home
View web version