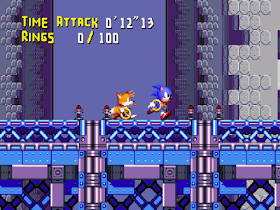 Genre: Action
Perspective: Side view
Visual: 2D scrolling
Gameplay: Platform
Art: Anime / manga
Prerelease of: Chaotix
Found by: MORGOTH
Build date: 1994
Platform: SEGA Genesis / Mega Drive
Sonic Crackers (also referred to as Sonic Studium or Sonic the Hedgehog 4) is a test alpha version of the unreleased SEGA Genesis game, the concept of which formed the basis for the future Knuckles' Chaotix. Because of this, it is often considered a prototype of Knuckles' Chaotix rather than a standalone game. Most likely, this prototype was not even released on physical media and existed only as a ROM file. Also, the code for this prototype is in many ways a compilation of resources from older games.
Although the reliability of this assembly was questioned in the first half of the 2000s (The inscription in the lower right corner of the title screen of the prototype "19940401" is usually identified as the release date of the assembly - April 1, 1994, April Fools' Day), finding early prototypes of Knuckles 'Chaotix and their comparison with Sonic Crackers made it possible to almost completely verify this prototype.

Unlike Knuckles' Chaotix, Sonic Crackers only has two characters - Sonic and Tails. They are connected to each other by two rings, each of which is held in his hand. If one character has gone too far from the second, the laggard will attract the overtaker and vice versa. There are no other enemies and characters in the prototype, there are no special abilities, as in KC, either. Of the objects, only thorns and springs are present, and the thorns do not work correctly: they do not cause any damage, however, when stepping on them, the ring loss animation is played.
This prototype already has a pause menu, but it also works with errors - after activating it, you can still move characters around the level when the time stops, however, some character sprites will be "lost" during the pause and remain in the same place.

In total, the game planned 37 "attractions" and nine "fields", divided into seven "worlds" and two "premiums". In one world there are five "attractions" and one "field", and in the "premium" one "attraction" and one "field". However, most levels are unplayable due to their emptiness. In standard mode, only two "attractions" and two "fields" are available. They are reproduced in the following order: "attraction" of the second world → first "field" → "attraction" of the first world → second "field". Moreover, this order is looped.
"Rides" are, in fact, ordinary levels in which the player must reach the final point. There is no final point in the "attractions" of the first world and therefore it will not be possible to complete these levels. In the "attractions" of the second world, you need to reach the top point of the level. Both levels have numerous collision bugs, which makes it difficult to pass them in an "honest" way. On the first attraction level, Time Over occurs after 3 minutes, on the second - after one.
"Fields" are pseudo-three-dimensional levels that you can walk on, but nothing can be done here, since "fields" have neither collisions (characters cannot, for example, fall into a drawn abyss), nor things with which one could to interact. It is not known what they were made for, it is possible that the levels of the world could be selected in them.