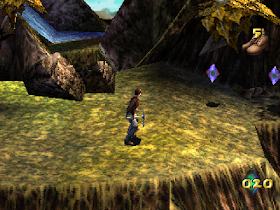 Genre: Action
Perspective: 3rd-person
Gameplay: Platform
Published by: Activision
Developed by: Activision
Released: 1998
Platform: PlayStation (PSX, PS1)
Isn't it true that stories like this always start the same way? You quietly wander peacefully in the jungle and suddenly some beauty literally pulls you out of the familiar world and drags you into her own. To top it off, she wants you to work your trusty pickaxe hard to save her doomed homeland. So if you have gotten yourself into a mess, then do not blame me! Already at the beginning of his adventures, Harry will find himself in a couple of nasty situations, and if he is not careful, he can quickly die.
Pitfall Harry revolutionized the game by appearing on Atari in the early 1980s. Then Activision developed a 16-bit version, quite successful, but clearly overdue - Castlevania and Gunstar Heroes confidently became the leaders in this genre. Now Harry is back in the arena in brilliant 3D and on PlayStation! You will never regret buying this game. Harry is back in shape. The smoking-room is alive, although clinical death has already occurred a couple of times. Activision did a great job and put together a brilliant team that managed to successfully revive Harry. The concept designers for the game's world and its inhabitants were brought in from Lucas Film (who designed the new Star Wars trilogy!). Two SEGA Japan employees (one Austrian, one French) were brought in to animate the (3D) characters. And the invited celebrities did their job brilliantly!
The very concept of Pitfall dates back to the days when video games were just being born, when the name of the game accurately reflected its content: Lunar Lander, Asteroids, etc. - glorious times of classicism! How much has changed since then. Maybe thanks to Pitfall, the famous Castlevania series was born.
In 3D, Harry can move in four directions (instead of two) by swinging on his vines. This makes the game more varied and challenging, but the good control of the four buttons (Up, Down, Left and Right) has created interesting new possibilities. How nice it is to jump from liana to liana. In addition, in the three-dimensional version, Activision managed to hide many secrets for the players, as well as create various routes for passing through any level.
Also (and this is a surprise) Harry came out of the jungle! It may seem a little strange to veterans of this game, but it's just about the trees! In a three-dimensional version, it is incredibly difficult to create a forest beautifully and voluminously (although this is brilliantly done in Pandemonium!) Now Harry travels through the land of volcanoes - rocks, lavas and craters. It's very easy to break your head! A completely unpredictable environment! Harry has to be resourceful in order to contrive and overcome the obstacles that arise: jump up, left, right, crawl along the bottom, go around. In general, you need to think and be on the lookout.
Perhaps the disadvantages of the game include the fact that the players see everything that happens from one point (shot with one camera). The developers of the game believe that the introduction of Camera Control could over-complicate the game and make it less interesting and fun.