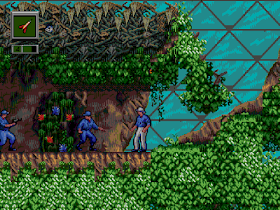 Genre: Action
Perspective: Side view
Visual: 2D scrolling
Gameplay: Shooter
Setting: Sci-fi / futuristic
Published by: SEGA of America
Developed by: BlueSky Software
Released: 1994
Platform: SEGA Genesis / Mega Drive)
Another action movie on the theme of Jurassic Park. As in the first part, you can play as both Grant and the raptor dinosaur. It is clear that the first one uses different types of weapons, from darts to grenades, while the dinosaur bites enemies and paws them. In general, the game is made at a decent level both in graphics and in game action. Three levels of difficulty.
‹
›
Home
View web version