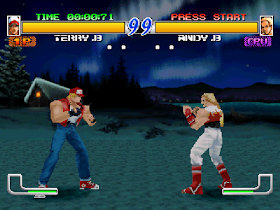 Genre: Action
Perspective: Side view
Art: Anime / manga
Gameplay: Fighting
Published by: SNK Corporation of America
Developed by: Japan Vistec, SNK Corporation
Released: 1999
Platform: PlayStation (PSX, PS1)
Fatal Fury has been a favorite among fans of cool arcade fighting games and will not disappoint them. An interesting, meaningful plot, fourteen stages, fourteen fighters and two street hooligans (Terry and Andy Bogard avenging the death of their father to Geese Howard), perfectly performing up to thirty different techniques in Versus, Arcade, Team Battle and Training modes. A feature of fights is the presence of a special power strip, having accumulated which, you can stun your opponent. Cool game!

Win the game with Mr. Karate, and Duck King will appear on the screen to the left of the question mark, which means he can be selected to play. When everything is done, additional modes Team Battle Mode and Data Mode are at your service.

Successfully complete the game with Billy in his alternate costume.

To make Duck King a playable character, successfully complete the game with all of the default characters.

To make Mr. Karate a "playable" character, successfully complete the game without using any sequels or losing a single round.
‹
›
Home
View web version