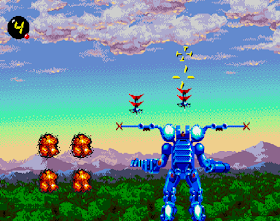 Genre: Action
Perspective: Behind view, Side view
Visual: 2D scrolling
Gameplay: Fighting, Platform, Shooter
Vehicular: Flight / aviation, Mecha / giant robot
Setting: Sci-fi / futuristic
Published by: Playmates Interactive Entertainment
Developed by: Novotrade Software Kft.
Released: 1995
Platform: SEGA Genesis / Mega Drive
The year is 2118. People finally learned how to create artificial people and soon slaves began to leave the bio-factories. Neosapies, artificial people, were called upon to completely replace human labor in all areas, since they were much more perfect than homosapiens. They could withstand such living conditions that a person could only dream. Once, as it happens, they revolted against their enslavers. Fortunately for humans, so far only on Mars. But earthly troops quickly began to surrender their positions to the rebels. The only hope for the Exo Squad is the fighters fighting against the Neosapies on the latest 'Mechs, dubbed the Exo.
With the emergence of the SNES in the US market, Sega needed real hits to get consumers to buy the console. Exo-Squad was supposed to be like this. The multi-part animated series, popular with teenagers, has found a playable embodiment. Luckily for us gamers, it's pretty good. A successful cocktail of action, third-person shooter and fighting game. Irresistible for SEGA Genesis graphics, excellent special effects, the presence of a good plot. In short, I do not advise you to miss the game! The only disappointment is the music. Even with a built-in player, it is in no way impressive.