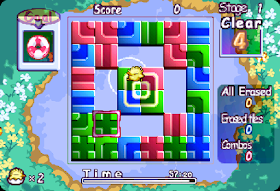 Genre: Puzzle
Perspective: Top-down
Visual: Fixed / flip-screen
Pacing: Real-time
Published by: Agetec
Developed by: Success Corp.
Released: 2001
Platform: PlayStation (PSX, PS1)
There lived the most ordinary family in the world - mother hen and father rooster. And they had many, many little chickens. They all looked like two drops of water, but there was one very special chicken among them. He differed from others in that he was very inquisitive and constantly got into all sorts of trouble. And then one day he came out of the hen house and got lost ... In this game you have to help a little chicken return home. It will not be easy to do this - in each level, the chick must pass through a certain number of blocks of the same color, while it is necessary to have time to do this within a certain time limit and still manage not to fall from the blocks into the water - otherwise the chicken will drown! If the chicken walks over two or more blocks of the same color, they disappear. Blocks can be moved and rotated ... The game supports two modes - for 1 and 2 players. The 1 player mode has a beginner mode (3 levels) and a more experienced player mode (10 levels). In 2-player mode, you have to fight with a partner who will control a little duckling. There should also be a hidden mode in the game, in which a new character similar to a chipmunk should appear instead of a chicken, but I don't know how to open it.
‹
›
Home
View web version