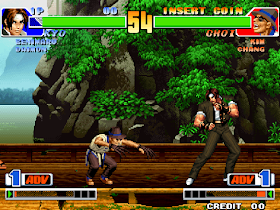 Genre: Action
Perspective: Side view
Visual: 2D scrolling
Gameplay: Arcade, Fighting
Art: Anime / manga
Published by: SNK of America
Developed by: SNK Corporation
Released: 1998
Platform: Neo-Geo
The King of Fighters '98 features 38 characters, many of which were available in previous parts of the series. Many heroes have been modified to make the game balance regardless of the choice of fighter. The gameplay has not changed much since The King of Fighters '97, and offers users a choice between two modes: Advance and Extra.
‹
›
Home
View web version