Taz in Escape from Mars (SEGA) 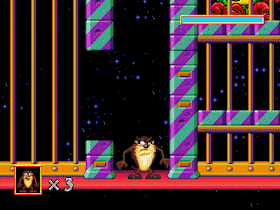 Genre: Action
Perspective: Side view
Visual: 2D scrolling
Gameplay: Platform
Published by: SEGA of America
Developed by: HeadGames
Released: 1994
Platform: SEGA Genesis / Mega Drive
The plot of the game is as follows: you (Taz) were caught by evil Martians and put in their Martian zoo. But it was not there. This is a TAZ. It can turn a concrete wall into a pile of dust. And then what? Martian Zoo. Yes, not a stone will be left of him after the arrival of Taz. Indeed, he will destroy most of the animals, break down all walls, and have plenty of fun. Throughout the game, you and your hero will visit the wild west (at the end of the stage you will have to fight an angry bull in a bullfight), you will also visit an alien forest and a mysterious castle. The pelvis can decrease and increase in size depending on what kind of elixir he drinks and what kind of stress he gets.
In the game, most enemies are larger than Taz, but there are also small ones. Well, that's understandable, another planet, radiation, mutation and all sorts of rubbish. And the Bosses, as you already understood, are also not from the matchbox. There will even be a leader-caterpillar in one stage. So this is generally a MUTANT! Just a huge, overgrown caterpillar. In short, the developers of the game with imagination, thank God, everything is in order, and you will not have to get bored of the monotonous Bosses.
The graphics are completely cartoonish. Maybe I repeat the words of one of the articles, but we really, as if sitting and watching a cartoon. She is so attractive (maybe not everyone will like her, but I was hooked), what else can I add? The game has a lot of bright colors. Bosses are especially full of them.
Music. But with the music, the developers were smart. Some kind of strange music, in some stages it is impossible to listen to it. Maybe this is the way it should be, like another world, another planet and another music. But the sounds here pleased me. It is especially interesting when Taz swears (I advise everyone to check it out). So for the soundtrack, the game gets a score below the average, that is, a solid four.
‹
›
Home
View web version