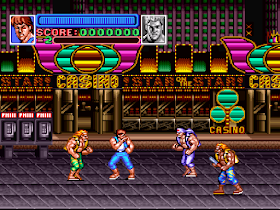 Genre: Action
Perspective: Side view
Visual: 2D scrolling
Gameplay: Arcade, Beat 'em up
Published by: Tradewest
Developed by: Technos Japan Corp.
Released: 1992
Platform: Super Nintendo (SNES)
In the era of the reign of 16-bit consoles, the Double Dragon series was on the rise. After serious work with 8-bit consoles and with Sega Genesis, on which the previous three games of the series were released, the publisher Tradewest unexpectedly changes course, announcing Super Double Dragon on the completely new SNES platform. In those days, by the way, many called this project Double Dragon 4, but now this is no longer true, because the real Double Dragon 4 came out recently.
Without further ado, the creators of the demolition option collected absolutely all the elements that we saw in previous games and put them into Super Double Dragon, just like a smart child makes a house of cubes. Again, various locations - city slums, forests, some factories - and everywhere there are those who want to find out relations with the Lee brothers. Again the Double Dragon dojo master, Billy and Jimmy, in the lead roles, and in addition they have an expanded assortment of punches. By the way, this is the only significant change that the creators of Super Double Dragon decided to make in the series - the scope for tactics and strategy in this game is unusually wide. You can catch the enemy in capture while he strikes, and you can counterattack yourself with a crushing series. You can inflict a beautiful kick in the air with a turn of the hull, or you can jump back, breaking the distance and at the same time meeting your opponent chasing you with a kick back. This is far from all, there can be many options.
But in general, this is practically the same "Double Dragon" that we are used to in previous games of the series. At the level of the best samples (such as Double Dragon 3 for NES) and certainly better than many unsuccessful games (like the nightmarish Double Dragon 3 on Sega Genesis). As with all Double Dragon, here you can take away the weapons of opponents and beat them with these weapons. And it should be noted that the list of weapons is really huge, there are poles, knives, nunchucks, even throwing bombs.
At the end of some levels, bosses await you, who, in the best traditions of the Double Dragon series, are made by real giants here. But in addition, there are sub-bosses in Super Double Dragon - cool fighters of about the same height as the main characters, who appear in the game quite often, usually surrounded by a few weaker minions. Among them, for example, a kickboxer in a trouser suit and with an unbuttoned jacket, something similar to actor Gary Daniels, or martial arts masters - these, by the way, are very tough nuts. And it is not easy to deal with one such sub-boss, and if there are several of them, then there is no doubt that the battle will be very fierce. Subbosses are an interesting invention of the Nintendo version, they fight well and delight the eye with beautiful punches, just like some playable bosses from the NES version of Double Dragon 3.
Of course, Super Double Dragon has its own flaws, but such flaws are common to most games in this series. First of all, a simple, like a direct fist in the nose, gameplay. We again walk through 2.5D levels and again clatter the crowds of opponents who remain identical even at the last level. The changes are minimal: in addition to the disgusting fight in the elevator, they also give a hoot to the crowd of guys on the roof of the rushing truck.
As mentioned above, the developers were too lazy to make a large number of various opponents, but the types that exist are worked out in good faith. Each fighter has his own set of attacks, there are also his own crown attacks, his own battle tactics. It’s interesting to fight, and we are sure that it would be possible to fight for a long time - if not for the short duration of the project itself, which can easily be run to the end in 40 minutes. By tradition, we recommend looking for a partner - just like in absolutely any beat'em up, play Super Double Dragon together will be twice as fascinating.
‹
›
Home
View web version