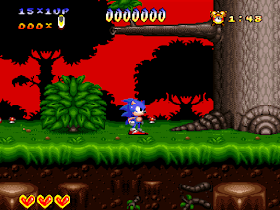 Genre: Action
Perspective: Side view
Visual: 2D scrolling
Gameplay: Platform
Art: Anime / manga
Developed by: Twin Eagles Group
Released: 1996
Platform: Super Nintendo (SNES)
A hack by Peruvian sceners Twin Eagles Group, released in cartridge form with their permission; later pirate cartridges were released under the name "Sonic the Hedgehog 4" and "Sonic & Knuckles".
The hack itself replaces Speedy Gonzales with Sonic and the imprisoned mice with Mario. There is some voice acting in this hack, recorded by the hackers themselves to replace the voices in the original game, with Mario yelling "Mario!", when he's rescued and Sonic yelling "Sonic, Sonic!" when he picks up speed shoes. Mario works as a checkpoint, just like the mice in the original game. The cheese pieces have been replaced with rings, although Sonic has a health meter as indicated by the hearts at the bottom left of the screen. Sonic's sprites are from Sonic The Hedgehog 2 on the Sega Mega Drive, except for his handling sprites, which are from Sonic The Hedgehog 3.
The backgrounds are glitched, being rendered in a red gradient which makes them look disjointed. However, they're normal during boss fights. The level order has been altered too, as the forest (the second stage in the original game) is now the first stage, followed by a castle, and what appears to be a futuristic spaceship. The game can crash on the third level after hitting a switch (a glitch which is also present in the original Speedy Gonzales ROM if played on some emulators) although it can be bypassed. After a level is completed, a running Sonic with a glitchy palette (probably Speedy's) appears on the screen and the score is calculated. Unlike the original game, this screen doesn't show how much cheese (rings) has been collected, how much time was left, or how many mice (Marios) were rescued.
Mario checkpoints are very common in the game, which is quite strange. However, the reason for all these oddly placed "checkpoints" is because Speedy Gonzales: Los Gatos Bandidos has a strong emphasis on rescuing trapped mice, more so than actually getting to the end of the screen (so it's more of a collecting game than a standard left-to-right platformer). However, the first level of Sonic The Hedgheog 4 is the "Surely Woods" level in Los Gatos Bandidos, picked presumably because unlike the others, it's a very linear "fast" level and the Marios aren't hidden too well.
‹
›
Home
View web version