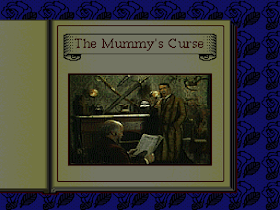 Genre: Adventure
Perspective: 1st-person
Gameplay: Graphic adventure, Puzzle elements
Narrative: Detective / mystery
Published by: SEGA of America
Developed by: ICOM Simulations
Released: 1992
Platform: SEGA CD / Mega-CD
The adventures of the famous British detective Sherlock Holmes (along with Dr. Watson). This time they have three things at once: the curse of the mummy (the terrifying death of three men who seemed to be killed by the mummy), the mystified killer (who framed the women, and they killed, without remembering anything) and the tin soldier (the murder of the old general, the past which will have to be meticulously investigated).
The gameplay is unusual, but interesting, because this is a quest! You will explore London far and wide, interrogate suspects, collect keys, check daily newspapers to ultimately find the criminal and put him in jail.
For those who love old quests, that’s the most, especially if Sherlock Holmes’s activities are not indifferent. But I’m ready to immediately disappoint - all three cases are not so big. Quickly run out, and even more boring. But your business.
‹
›
Home
View web version