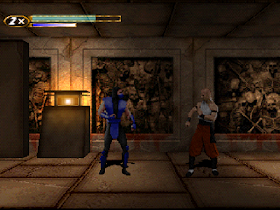 Genre: Action
Perspective: Side view
Gameplay: Arcade, Fighting, Platform
Setting: Sci-fi / futuristic
Published by: Midway Home Entertainment
Developed by: Midway Games, Avalanche Software LLC
Released: 1997
Platform: PlayStation (PSX, PS1)
Mortal Kombat Mythologies: Sub-Zero has several new characters, and the action begins as if before Mortal Kombat 1 (at the same time, the same developers were developing a version of Mortal Kombat 4 for arcade machines, in which the action is currently taking place). At the same time, an attempt was made to create Mortal Kombat Mythologies in the Action genre. The authors tried to "drag" the cold-blooded ninja Sub-Zero through eight stunning worlds. In total, the game has about 30 characters. The action is more complex and more varied than simple bloodshed in the traditional MK-style. Mortal Kombat Mythologies: Sub-Zero looks amazing. Stereoscopic graphics (combining 2-D and 3-D objects) creates completely new possibilities for movement and image. The quality is not worse than in the movies. And the "worlds" are just a miracle. Now in battle you can dodge, move away from attacks, in general, the movements have become more difficult and interesting.
You can play only one character: Sub-Zero. One of the most popular characters in the Mortal Kombat series, he has the most interesting past. The idea of ​​Mythologies in general was to look deeper into the past of our heroes, and Sub-Zero seemed to the authors the most interesting in this regard. Plus, his old ties to the ninja clan and the Scorpion-om allow him to "tell" an awesome story! So, Mythologies is, first of all, Adventure, made in the form of a platforming game, and players will get real pleasure not so much from fights, but from the plot, history.
Sub-Zero's fighting arsenal has retained all of its signature moves, but added something new too! He can now climb rocks, climb ropes, jump over cracks and crevices, and will also master several new attacks as the game progresses. You upgrade Sub-Zero as you play. The game begins with a minimal "gentleman's" set. Note that during the game you collect the so-called "Experience Points". The more enemies you defeat, the more "good" you will collect, the more missions you complete - the more experience (experience points) you will gain! Find new power and strength! Moving around the worlds, you collect points, objects, items, etc. Outwardly, it looks like a role-playing game, and it's not bad. However, no one else can interfere in the game and take part in your travels and searches. many others. There are so many interesting characters and stories in MK ...
A wide variety of weapons will be used against Sub-Zero, but he will rely on his own strength and capabilities. Well, you can help him. The authors have kept all the best from Mortal Kombat: dynamics, bloody and merciless battles, a great company of characters.

How to earn EP

How to Earn EP - Experienced Points. Only with the help of combinations (Combos). At least the easiest. And there are just a million of them. So for purely strategic purposes, we advise you to master the three easiest and most effective combinations. They do not require special skill, and they do not look super cool, but they give a bunch of points and allow you to perform more powerful special techniques (due to the points gained).

Mortal Kombat Mythologies: Sub-Zero does not have an absolutely unchanged "fate line", a lot in the game depends on you and changes from time to time. Check at least on this example and make sure that the game depends a lot on whether, for example, you finish off your opponent or not. Wait until the opponent falls to his knees. Stand next to his head a step away and quickly press Forward, Down, Forward + High Punch. But remember that only a few opponents can be beheaded this way. And if you don't rip his head off, everything will go differently.