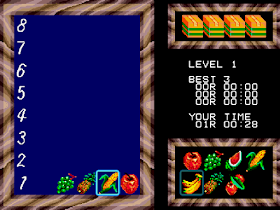 Genre: Puzzle
Visual: Fixed / flip-screen
Gameplay: Board game
Pacing: Turn-based
Published by: SEGA Enterprises Ltd.
Developed by: SEGA Enterprises Ltd.
Released: 1991
Platform: SEGA Genesis / Mega Drive
The name of the game MegaMind is the same as the cartoon Megamind released in 2010 by DreamWorks Animation and Paramount Pictures. But there is nothing in common other than the name between them. This is a logic game, a puzzle, so to speak. The game is a computer version of the code-breaking board. In it you need to guess the sequence of symbols and place them correctly. The game has four difficulty levels. Unfortunately, the game is in Japanese and if you have never seen or played such games, it will be very problematic to understand it.
The Sega Genesis game was distributed over the SegaNet.
‹
›
Home
View web version