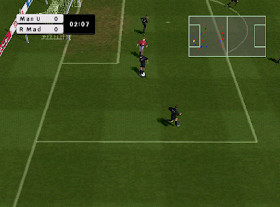 Genre: Sports
Perspective: 3rd-person, Bird's-eye view
Interface: Direct control, Multiple units / characters control
Sport: Football (European) / Soccer
Published by: Electronic Arts
Developed by: Electronic Arts UK Ltd.
Released: 2002
Platform: PlayStation (PSX, PS1)
The genre of sports simulators can be called the most stable in the gaming industry. He is not in a fever with numerous high-profile announcements; revolutionary breakthroughs in gameplay and graphics are also rare here. From year to year, a number of companies methodically release to the market several dozen improved versions of their old sports games. Apart from the other number in the name, these products differ from their predecessors only by some cosmetic improvements in the field of gameplay and appearance. To inexperienced gamers these innovations may seem small and insignificant, but true fans of sports games find them so important that they can spend a whole year with the game before the next version is released. All of the above fits very well with one of the most famous and popular sports series - FIFA from the Great and Terrible EA Sports. For almost ten years now, games under this brand have been on the shelves, constantly improving, improving and gradually approaching the ideal. Today I want to tell you about FIFA 2003 - the most recent part of this series The game was released on all modern game consoles, only the deceased in the Dreamcast database was ignored, however, the FIFA series games never came out on it: SEGA preferred to make sports simulators yourself. Today's talk will focus on the PSone version. Why exactly about it, and not about the version for any of the new generation consoles? For two very compelling reasons, in my opinion. Firstly, in our country the number of new consoles per capita is still not very large, and secondly, it is doubtful that F1FA 2004, which should appear on PSone towards the end of this year, will greatly change for the better compared to the one described here version. Be that as it may, FIFA 2003 is certainly worthy of our attention, because to create on such an old gaming system as the PlayStation, a game that is in no way inferior in its fun to versions for more powerful consoles is already a feat.

They are greeted by clothes

It would be naive to assume that FIFA 2003 for PSone will be able to at least approach the quality of the visual design of the versions of the game for the next generation consoles. And let the magicians of the virtual pen from EA Sports have long gained fame as great optimizers of program code and masters of pulling all its capabilities from any gaming system, but even they were powerless in this case. Although, I must say that to the developers' credit, the external component has changed for the better since the times of the frankly failed FIFA 2002. This is especially noticeable when looking at the stands: the detailed stadiums, the appearance of which fully matches their real prototypes, are really capable of inspiring the feeling of being at a real football match. Sometimes it begins to seem that you are not sitting at home in a comfortable chair, but are there, at the stadium. Around you, fans are desperately waving their scarves and flags, the rumble of drums and screams of fans drown out all other sounds ... But for the main characters of the game - in fact, football players - the capabilities of the per-PlayStation were clearly not enough. The detail of the players remained at the same level, quite acceptable for a console with such a huge experience, but flawed in comparison with the latest technological advances. The players clearly lack fluidity of movement: whether they are driving the ball towards the opponent's goal or throwing it in from the sideline, it is difficult to get rid of the feeling that the game is “slowing down”. Even the motion capture technology, which has become an integral part not only of the FIFA series, but also of all sports simulators produced by EA Sports, does not save the situation.
But something from FIFA 2003 was not able to take away even the limited capabilities of the console. For example, you can choose the most successful of several camera positions, which, together with the means of scaling the picture and changing the height of the viewpoint, will always give the player the opportunity to choose the most convenient angle. The usual scenes on the engine remained in place, demonstrating the joy of the players after a goal was scored, the righteous anger after the appointment of a free kick, the players of the losing team sadly wandering into the locker room and joyfully saluting the winners to the audience. But the quality of the soundtrack in comparison with previous versions has clearly stepped forward. Since most of the noise (SFX) effects during a match fall on the audience, the developers paid maximum attention to them. The spectators are no longer limited to an even hum - they diligently react to all events taking place on the field, support their team with cheers, and chant "chants." It is known that EA Sports specially sent trusted people armed with sound recording equipment to football matches in order to collect "chants, puffs and sniffs" of real fans from different countries during no less real football matches. By the way, while these lines are being written, FIFA 2004 is already being forged in EA's crucibles, where the sound recorded during real matches will also be present.

The graphics don't matter, the process itself is important!

If FIFA 2003 were even the most beautiful game in the world, without brains in the heads of virtual football players and high-quality gameplay, it would not be worth a broken penny. The quality of transferring real football to virtual spaces affects not only the number of copies of the game sold, but also the prestige of the entire series, which EA Sports has never forgotten and has always tried to improve its own developments in this area. Basically, the developers succeeded in everything, but the inexorable Tablets of History remember their mistakes too. Many "professional" gamers all over the world (myself included) did not accept the introduction of arcade elements to the sports simulator. We have not yet forgotten the FIFA 2002 World Cup, where this notorious "element" arose for the first time in FIFA history: some players on the pitch (usually the best of real football players) received the so-called "star status", as a result of which they could inflict terrifying power shots, after which the ball flew to the goal, leaving a red train. They could run across the field faster than any sprinter. Thus, EA Sports tried to bring something new to the game. But the experiment was deemed unsuccessful, all developments were frozen, and in FIFA 2003 the sports series threw off its arcade guise and again began to resemble sportsim. And if so, then again such things as team play, the correct placement of players on the field, the selection of the optimal squad for each match, the purchase and sale of players are in the price. Of course, you can forget about all these subtleties and just kick the ball towards the opposite gate in the hope that sooner or later it will get there. But still, it is better to use not only reflexes, but also the head in the fight for champion titles - this will not only increase the chances of success, but also help you to more fully feel the atmosphere of sports struggle, which forces you to take your team to the virtual field again and again. Perhaps my opinion will seem subjective, but I will publish it all the same: the game has become noticeably more difficult. And it's not that I've forgotten which side to grab the joystick from, or I've grown old and lost my former speed and response. Rather, AI-led opponents have finally learned to work together. More than once or twice during the communication with FIFA 2003, the computer AI (aka “AI”) demonstrated remarkable ability to apply pressure, defended competently if the score was in his favor, and otherwise - desperately went on the attack. More than once the "computer" has demonstrated how to make penetrating passes and act during set pieces. The players driven by the console processor often behaved in such a way that they wanted to look around and see if someone had picked up a second joystick: the enemy is acting very humanly. It should be added that the level of difficulty can be adjusted, and this is not just an increase in the speed of the enemy's actions (which, alas, we have already got used to from the previous games of the series): moving one level up now significantly adds AI and brains, and literacy in tactical matters ... The speed of the game can also be adjusted separately. Having worked a little with these settings, each player can easily pick up a worthy opponent for himself.

The abundance of real-life football teams and footballers has already become an integral part of the FIFA franchise, so, in principle, you don't even need to mention it. In FIFA 2003 we were lucky - nothing has changed, all more or less eminent clubs and strong national teams are present in the game, their rosters are 100% consistent with the lists of the end of 2002 (the game was released in early November), some eminent football players can even be find out by sight.
Ask, what is the promised luck? The point is that all these pleasant things for football fans were under threat. After the release of the FIFA 2002 World Cup game, one of the most famous and highly paid football players on the planet - the goalkeeper of the German national team Oliver Kahn threatened to sue EA Sports for illegal use of his name in the game. Given the authority of Kahn, as well as the fact that he was supported by some other players, the scandal could have ended in very serious trouble for the developers. Then, however, Oliver admitted that he simply did not like the actions of his virtual incarnation in the frame of the gate. Allegedly, the virtual Kahn misses such balls that his prototype takes "with one left". The angry German decided to defend his reputation and made all this mess. But we were lucky, the scandal was hushed up, EA Sports is still the owner of the license to use the names of clubs and the names of players in their games, and the gatekeeper of the German national team in FIFA 2003 is retained. I wonder if Oliver Kahn is satisfied with "his" actions in the new game?

Instead of an epilogue

Well, my story about this game has come to an end, it's time to sum up. Honestly, I really don't want to. Although EA Sports is going to release the next part of the sports series - the game FIFA 2004 - on PSone, it is highly doubtful that the developers will be able to add any more innovations to those that were implemented in the game described here. Technological progress does not stand still, now games under the FIFA brand will delight players on other, more advanced consoles. Well, the period of the PSone series life turned out to be very, very successful: it was here that the parameters of the best football simulator were finally determined - now it's time to storm new heights! Well, for those who have not yet acquired any of the new generation systems, I would advise you to definitely try this particular game. You can have a great time with it, and it still remains the best in its genre, besides, it is with FIFA 2003 that a whole chapter in the history of the development of football simulators ends.
‹
›
Home
View web version