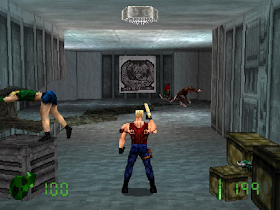 Genre: Action
Perspective: Behind view
Visual: 2Dscrolling
Gameplay: Shooter
Interface: Direct control
Setting: Sci-fi / futuristic
Narrative: Comedy
Published by: Infogrames
Developed by: n-Space
Released: 2000
Platform: PlayStation (PSX, PS1)
In the distant, distant future, the earth was attacked by aliens (as you understand, the plot is extremely original), who took over the planet, killed the entire male population and enslaved almost all women. However, the plan was not entirely successful, as the women who escaped the capture organized a rebel squad known as the Unified Babe Resistance (UBR) and, of course, began to create headaches for the alien aggressors. It is clear that the aliens quickly found the headquarters of this organization and immediately attacked it. The unfortunate women did not have the slightest chance of winning this fight, but they still came up with something. Scientists who were part of this rebel group managed to somehow construct a time machine and used it to find out if there was in the distant past of the Earth some outstanding hero who is able to destroy an alien plague? And, of course, they immediately found Duke Nukem, who was quietly having fun and living for his own pleasure. Suddenly, a woman from the distant future and five aliens, terribly resembling pigs, appear before him. When, finally, Duke understood the situation that threatens the future of earthlings and all of humanity, he immediately went to the aid of the unfortunate women. Actually, this is where the game begins.

Brief walkthrough of the game

Level 1. Welcome to the Future Objectives