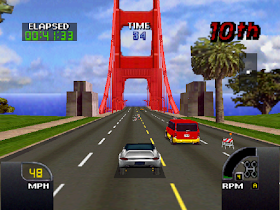 Genre: Action, Racing / driving
Perspective: 1st-person, Behind view
Vehicular: Automobile, Street racing
Published by: Nintendo of America Inc.
Developed by: Midway Manufacturing Company
Released: 1996
Platform: Nintendo 64 (N64)
As in most racing video games, players compete on one-way tracks consisting of streets loosely based on real-life locations. While competing, players do their best to avoid the various hazards that can be encountered on the road, such as oncoming traffic or construction. Players can choose from seven different cars to compete. Like other racing games, the car can simulate both an automatic and manual transmission car. In automatic, the gear speed is increased, while in manual mode the transmission has to be changed manually during the race. Players who finish in first place continue to the next race, while if they finish second or third, this has to be repeated in order to progress. Unlike most racing games, there is an option to change the background music with a button. Controlling cars in Cruis'n USA is quite tense compared to other racing games for the Nintendo 64. Whenever the game is completed, both a new car and a new color of it are unlocked.

NOTE: To unlock these 3 cars, you must do the following: When you are in the car selection screen, they must be pressed at the same time: c-up, c-down and c-left and without releasing them you will see that the Chevrolet becomes in a Jeep, Ford in a school Bus and Mitsubishi in a police car and finally press Start to go to the race (Without releasing the 3 "C" buttons) (The only one that does not have a "secret car" is the Ferrari on the right)

The slopes that are run are a tour of the United States, with a total of 14 tracks classified as easy, medium and difficult. It should be noted that there is no difficulty curve (that is, you start with an easy one and suddenly a very difficult one), and they are:
‹
›
Home
View web version