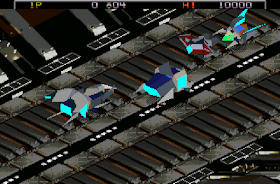 Genre: Action
Perspective: Isometric
Gameplay: Shooter
Setting: Sci-fi / futuristic
Published by: SEGA of America
Developed by: CSK Research Institute Corp.
Released: 1995
Platform: SEGA 32X
Shooter type View Point. You will have to fly on various insect-like ships, which can be changed directly in battle, simply jumping in the form of a small control capsule from one ship to another. The control capsule, in principle, can fight and itself, fortunately, is armed, but it is better not to do this - it is too weak.
‹
›
Home
View web version