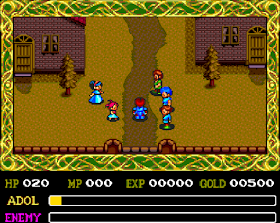 Genre: Role-Playing (RPG)
Perspective: Bird's-eye view
Visual: 2D scrolling
Art: Anime / manga
Gameplay: Action RPG
Setting: Fantasy
Published by: Hudson Soft Company
Developed by: Hudson Soft Company
Released: 1993
Platform: TurboGrafx-CD (PC Engine)
Continuation of the unique series of games in the Ys universe. Dawn of Ys is one of two games released under the name Ys IV (the other was Mask of the Sun).
Events occur shortly after Ys II, but before Ys III. The game begins with Adol and his friend returning to the city of Minea, in which the first part of Ys began. It seems that everything calmed down and you can relax, but it was not there! A new evil has come, cleaner than the former. And again, Adol embarks on a ship sailing to the distant land of Celceta to fight evil.
In this game, the authors corrected the main error of the third part - now everything has returned to the top view, and not from the side. And the rest - the gameplay is similar to the one in the second part, with magic which. Also, Ryo Yonemitsu runs the musical arrangement again, which is good news!
The PC-Engine version of the game is exclusive and only thanks to the fans there is an English translation of this magnificent game!
Interestingly, Ys IV was conceived as a trilogy, or rather, three versions of the game from those development companies that made the Ys III ports were conceived. Those were Tonkin House - a port for SNES, Hudson Soft - a port for PC Engine CD and Sega - a port for Genesis / Megadrive (or Sega CD). However, the latter, Sega, refused halfway from its version (but in vain, because the game is excellent, it might extend the life of Sega Genesis or Sega CD).
‹
›
Home
View web version