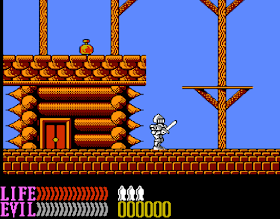 Genre: Action
Perspective: Side view
Visual: 2D scrolling
Gameplay: Metroidvania, Platform
Setting: Fantasy
Published by: Acclaim Entertainment
Developed by: Zippo Games
Released: 1992
Platform: Nintendo (NES)
Kuros is back! Continuation (or rather the third part) of the Wizards & Warriors series of games.
Remember, you defeated the mage Malkil with your iron sword? Have you been greeted with triumph and glory? So forget it now. They dishonored you with magic - they took away the armor, memory, and honor collected by such labor. But the feeling of evil leads you to the distant city of Paidap, to the very places where Malkil lives (or rather rules, because now he is manipulating the king of Paidap)! And again, you need to look for someone, improve, get new objects, knowledge and magic.
‹
›
Home
View web version