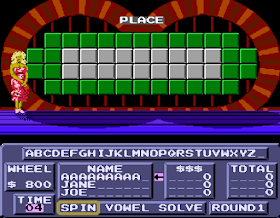 Genre: Puzzle
Perspective: 1st-person
Visual: Fixed / flip-screen
Gameplay: Game show / trivia / quiz, Word construction
Published by: GameTek
Developed by: Rare Limited
Released: 1988
Platforms: Nintendo (NES), SEGA CD / Mega-CD
The game is based on the popular in the past American television show (although it is currently in progress).
Need to guess the phrases. All the same three participants, one at a time steeper than the wheel of luck and successively guessing phrases. Well, they win dollars. You can compete both with friends and against the computer.
The original game appeared again on Commodore 64. And then the list of ports only expanded: Apple II, Game Boy, PC-DOS, Game Gear, Sega Genesis, SNES, Sega CD, Nintendo 64, Playstation , PS2, PS3, Nintendo DS, Wii. However, the ports were not direct, but with some changes (in addition to graphics and sound - the rules, questions, number of questions, presenters, etc. changed).
‹
›
Home
View web version