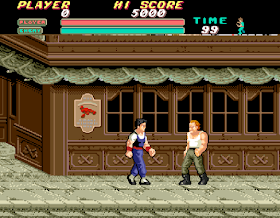 Genre: Action
Perspective: Side view
Visual: 2D scrolling
Gameplay: Arcade, Beat 'em up
Interface: Direct control
Published by: NEC Home Electronics (U.S.A.) Inc.
Developed by: Irem Corp.
Released: 1989
Platform: TurboGrafx / PC Engine
Vigilante is a side-scrolling beat-em-up. It features an anonymous tough hero that roams the streets to beat up The Rogues gang that kidnapped his girlfriend Maria. The game offers five distinct locations, such as city streets and a junkyard, with many different thugs with different strengths. You fight with your fists, feet and a chain, with a regular stance, crouched and jumping attacks. Each level features an end boss which requires a specific tactic in order to progress. Enemies keep spawning continuously from the left and the right side of the screen until the boss is reached, so a steady pace forward is required to reach the end of the level before time runs out. When enemies come too close they will grab the character and quick presses left and right are need to set him free, as he is then vulnerable to incoming attacks.
‹
›
Home
View web version