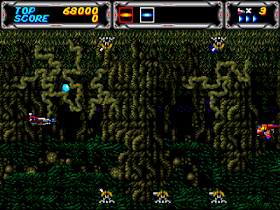 Genre: Action
Perspective: Side view
Visual: 2D scrolling
Gameplay: Shooter
Setting: Sci-fi / futuristic
Published by: ActivisionPublishing
Developed by: VicariousVisions
Released: 2005
Platform: SEGA Genesis / Mega Drive
A series of these shooters for Sega immediately attracted attention. This is a classic flying shooter where you need to shoot everything that moves. However, the games immediately gained interest in their quality performance.
This is one of the best R-Type clones, with new weapons, impressive graphics and wild gameplay.
The first game in the series, Thunder Force, was released not only for Sega. At Super Nintedo, this game came out as Thunder Spirits.

On the title screen, press A + B + C, then press START. You will be taken to a screen where you can choose the speed of the ship, complexity and sound.
‹
›
Home
View web version